Alberta Wildlife Solutions is based out of Lac La Biche, Alberta and travels throughout the Western Provinces providing Industry with solutions to wildlife situations that may arise when operating in remote areas. We provide Bear Aversion for camps and work-sites utilizing dogs, install and supervise electric fences for large mammal deterrence and Wildlife Monitoring for Industrial locations.

Bear den locating, trail monitoring with Game Cameras, animal population and impact assessments provided with Daily Reporting. All necessary work safety tickets are obtained, equipment and trucks newer and maintained, plus all safety requirements are respected and utilized. This business is organized to mesh fully with your work-site requirements.

Bear encounters can be an all too familiar occurrence in industrial situations. Good responses to bears around personnel and infrastructure are critical to ensure a healthy outcome for both the bear and industry. A good bear protocol includes the use of trained dogs for the aversion of bears, where the dogs are used not only to haze bears away from danger, but also to patrol and detect the presence of bears around camps and work sites.

Bears may be lingering in the vicinity of an industrial area and only become known when they become habituated. The dogs detect these bears early and will deter the bears from the area. In addition, the canine scent the dogs leave behind is a deterrent in itself as the bears equate this scent with the presence of wolves. Wolves are natural predators of bears and bears will avoid open areas where they think wolves are active.

The dogs are trained to worry, harass but not contact the bear. Four dogs are used and the bears flee from this number of dogs. I have not ever had a bear stand up to four dogs but they always choose to run to cover. The dogs are equipped with electronic GPS collars, and will only be allowed to chase the bears 60-70 meters away from the industrial sites. The idea is not to harm the bear but avert it back into safe habitat. The bear learns that the dogs patrol the open areas where industry is active but the forest is safe ground for the bear. Once a bear is averted, an investigation is started to determine why that bear was at that location.

The dogs are expert at sniffing out any attractants, and I remove whatever they find. The dogs are a welcome sight to personnel working in the area, the dogs are chosen for their great demeanor around people. But anyone feeding wildlife, quickly finds out these dogs are experts in finding and exposing any foodstuffs left behind. The sight of the dogs working around any area is usually enough for personnel to re-think feeding of wildlife. There is many benefits to the use of dogs, beyond simply chasing bears away.

The dogs are trained to sniff out and detect active animal dens during the hibernating period. Areas that will see activity can be pre-scouted with the use of dogs, or areas being actively developed can benefit from the use of dogs to find dens with-in close proximity to work sites such as Seismic Lines, Pads or Camps.

A good number of bear dens are hidden under deep snow and would be undetectable to anything other than the nose of a dog. When the dogs find a den, they signal me and we mark the area.

The dogs do not disturb the occupant of the den, and stand back while I ascertain the nature of the den. Mitigation plans can then be developed protecting the denning animal.

This is a very effective program and prevents tragic occurrences where heavy equipment hits an occupied bear den. 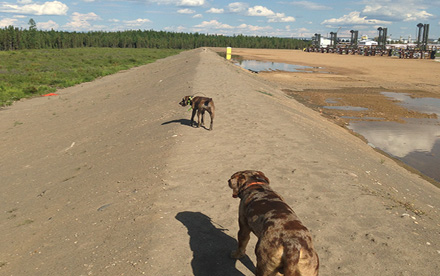 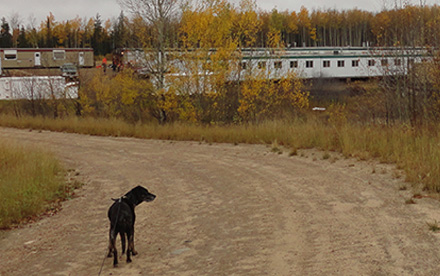 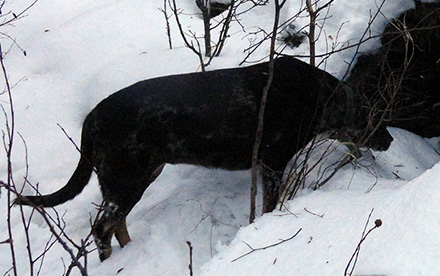 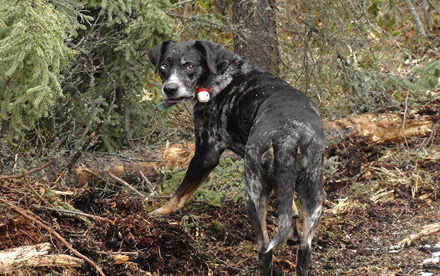 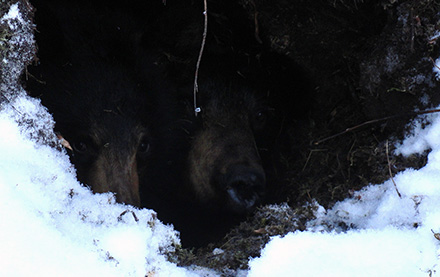 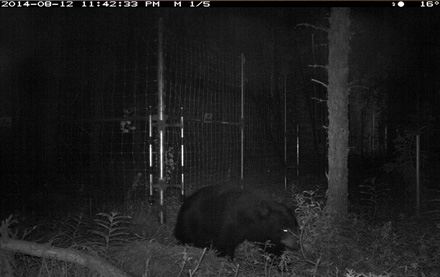